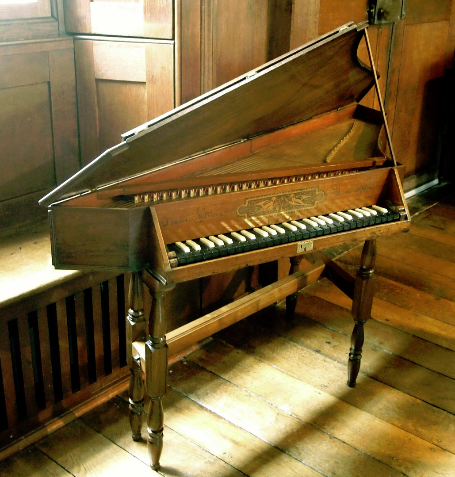 Most of the spinets from the School of Stephen Keene feature attractive marquetry inserts on the nameboard.  I might be biased, of course, but I think that this design of two birds is the most stylish of all.

It is difficult to be certain which woods were used for these designs, but we can be fairly sure that the 'black' is not ebony.  For one thing, it is (now) nowhere nearly as dark as the keys, and also ebony is very brittle, and would have been very difficult to work this finely.  So probably some stained hardwood.  But we can also be sure that the colours have changed over the past 312 years.

But as well as the question of how it looked originally, we have to decide what to do now.

The marqetry is amazingly fine; I just cannot understand how it was done, especially bearing in mind possible problems of eyesight, lighting, and the tools available.  The work would certainly have been beyond me, but at this point Tom Strange came to the rescue.  He has access to a high-accuracy computer-controlled laser.  The computer was able to convert a high-resolution image of the original design into instructions to guide the laser, and this cut several copies of the design in a selection of woods.  Those chosen were a 'dark walnut' stain for the dark parts, and sycamore for the pale sections.  Even so, assembly of the delicate elements took me to the limits of my dexterity and eyesight.  The elements were assembled onto a card backing using heat-sensitive glue-film, and a tacking iron.  The use of wet glue was tried, but this caused uncontrollable curling problems.

The completed motif.  With the surrounding pear veneer, this was then assembled on the spruce nameboard base.

With the mouldings all round the edges completed, a first coat of brown shellac was applied.  This dramatically enhanced the beauty of the walnut, and softened the pale colour of the sycamore inlay.  The surface of the beech wrestplank was painted to resemble walnut, as on the original.

An important decision was: what name to put on the front?  This is a replica, which is not quite the same as a forgery.  And few people would think that this new instrument had been made in 1704.  We might feel some uneasiness about copying the claim 'Edward Blunt of London made it' but the ornamental lettering is an important part of its appeal.  And actually, it's not quite as simple as that: the inscription inside the original said 'Thomas Hitchcock His Make in 1704'.  So this one now carries the inscription 'Eduardus Blunt Londini Fecit' on the front.  My name as maker is already on the top and bottom keys and jacks, and there will be a further admission on the back of the nameboard.

For the calligraphy itself, Indian ink is convenient, but it is 'too black'. A gentler appearance is achieved by the use of a mixture of burnt umber and ivory black pigments, which I used in an acrylic base.

Note that I have not (well, not yet anyway) scratched the numbers '1664' underneath the marquetry (see top pictures).  This notorious addition misled early keyboard historians for more than a hundred years, and is quoted as evidence that 'Thomas Hitchcock the Elder' (who was actually a chair-maker) was making spinets as early as 1664.  The story appears in many standard texts, including as recently as 'Boalch III' (Makers of the Harpsichord and Clavichord), published in 1995.  It is fair to point out, though, that Charles Mould, the editor of Boalch III, was beginning to suspect that something was not quite right.  Peter Mole, in his 2009 thesis, cast further doubt, and agrees with Charles Mould's suggestion that the inscription had been misread.  However, neither of them had seen this spinet, which had not been heard of since the 1885 Royal Albert Hall Exhibition.  It did not emerge from hiding until it appeared at auction in 2014.

We now know that the '1664' inscription was not original, but it is very much part of the history of this spinet, and spinets in general.  So if this is a replica of the instrument as it was made, it should not be there.  But I'm still not sure...

Apart from the lid (which will have to wait for fair weather because it will be made outside) and the final finishing, the case of the instrument is now complete.  The next job will be to make the jacks and wrestpins, and very soon now we will hear the first note.