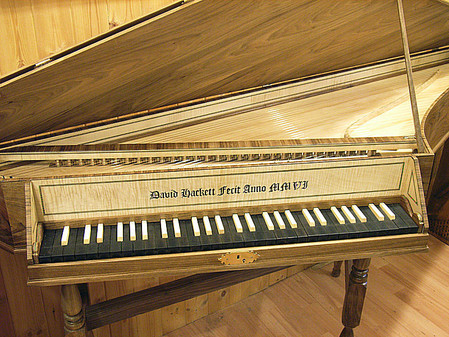 Perhaps these have always been my favourite instruments, but please don't tell my Square Pianos!

Relatively few original spinets turn up at auction, and prices are beyond the reach of most of us.  However, it is not too difficult to make a decent spinet, and I hope that this page will encourage people to have a go.  There used to be reasonably-priced kits available: the Early Music Shop's 'Keene & Brackley' and the freelance designs of John Storrs were good.

I f there's anything you'd like to ask, or just to show interest, please contact me, David, on friends.sp@btinternet.com

There are two Quite Interesting PDFs that you might enjoy reading: 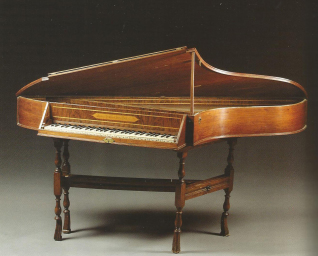 A Little Bit of History

I’m happy to say that I’m now the proud owner of a spinet by Keene & Brackley.

No, not the famous one formerly owned by John Barnes, but a lesser-known example.  Admittedly, there are a few bits missing, like the keys, soundboard, lid, case… well actually it’s just the nameboard that has survived.  The one that was in the Colt Collection for many years, and sold in the recent auction.  According to the writing on the back, it had previously belonged to Taphouse of Oxford, who gave it to A J Hipkins.  Boalch says that it then belonged to Henry Tull, who presumably gave it to Colt.  Also on the back it says “Date written on key 1719.”  This is interesting, because presumably when that was written more of the instrument survived.  And also because Stephen Keene’s will was proved in 1712 (and he would have been about 80 in 1719 anyway.)

Another interesting point is that the design of the marquetry on this nameboard, characteristic of the period, was used as the pattern for the nameboard of the 1973 ‘D A’ harpsichord, also in the Colt Sale.

It was a pleasure to meet Alexandra Cade when she visited the UK recently.  She is currently studying for a PhD at Winterthur, Delaware, on the topic of amateur piano makers in America, c. 1790 - 1810.  There were few, if any such makers in London, but the spirit of self-sufficiency was strong in the new United States of America, and these amateur makers were an important part of the development of the piano in in the new country. Their surviving instruments show remarkable diversity and ingenuity, but more of this another time.

During Alexandra's studies for the degrees of B Mus and BA in American history at Rochester, she spent two summers as an intern at the Colonial Williamsburg Foundation, and after graduating she returned as apprentice harpsichord maker, making English spinets using the materials and methods of the original makers. ...and with Ed Wright, using a frame-saw to prepare a piece of timber. 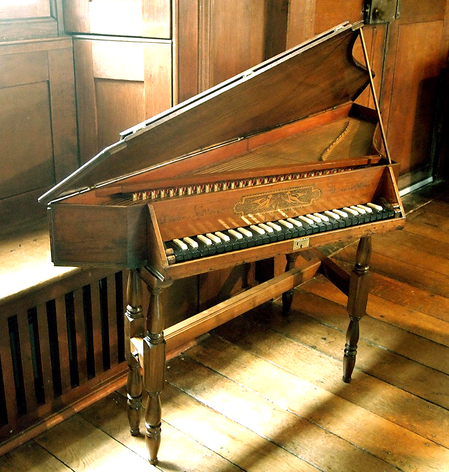 It has recently been my privilege to share in the ownership of a remarkable spinet made by Edward Blunt in 1704, and to restore it to playing condition.  This has been very successful, and the next stage in the story is to make a replica.  This project offers the ideal opportunity for Friends of Square Pianos to follow the construction in real time.

For clarity, the story will be presented in several sections.  Please click on the headings below:

The Soundboard and Bridge

The Case (2) - Coming Together

The Keyframe and Keyboard