Please get in touch with me, David, on friends.sp@btinternet.com with questions, comments, or just to say 'Hello'.  This is a site for everyone, especially those new to the world of Square Pianos.  And of course, we very much appreciate the support of those with more experience.

An Interesting L &B at Trevanion Auctions

Lot 15 in this sale will be a fine 1765 spinet by Baker Harris.  There is a 1765 Baker Harris spinet listed in Boalch, but that one went to John Collins of Newport , Rhode Island, in the year it was made, and is almost certainly still in the USA.  So this one is a 'New Discovery'

It has now arrived in the saleroom at Watford,  and we now have the additional pictures of this handsome spinet.  Please see the Auction Page for details.

An Interesting L &B at Trevanion Auctions

This pretty Longman & Broderip piano will be in the sale at Trevanion Auctioneers, Whitchurch, Shropshire, on 29th June.  The number 446 (in the five-octave series) dates it to 1786.  Please see the Auction Page for pictures and details.

A memorable sale at Gardiner Houlgate on 17th June). My favourite harpsichord (the 1612 Ruckers) achieved twice the top estimate, to sell for £180,000 - that's £227,520 including premium. Is that a record for a harpsichord sale?

We mustn't forget the Joseph Mann spinet though - that sold just on estimate for £4,000 hammer price. An interesting instrument.

More details and pictures on the Auction Page.

Pictures by, and by courtesy of Gardiner Houlgate

Further details and pictures on the Auction Page.

All pictures by, and by courtesy of, Gardiner Houlgate.

A further complication has arisen.  Contrary to my expectations that the new law would replace the existing requirement for Article 10 certification for post-1947 ivory keyboards, a recent press release from the British Antique Dealers' Association stated that the laws will run concurrently:

This has been confirmed by APHA on behalf of DEFRA, and it does mean that all ivory keyboards post-1947 will still need and Article 10 certificate as well as an Ivory Sales Act exemption certificate in order to be legally sold.  The cost of an Article 10 application is £31, and unlike the registration for the Ivory Sales Act, the provisional approval is not instant.  This doesn't make sense to me, having to apply twice for the same issue, but as a Wise Man once told me: "It doesn't have to make sense, it's a rule."

This doesn't affect square pianos, which mostly have a safety margin of at least 100 years, but it does affect the post-war revival and replica spinets, clavichords, and harpsichords that we also love.  Care needed for those 1947 - 1974 Morleys, Dolmetsches, and Gobles.  More of a problem for amateurs and smaller makers, where proof will often be more difficult.

The case for 'De-Ivorisation' has never looked stronger!

Comments and questions welcome - I'll help if I can - but I can't change the law!  David on  Friends.sp@btinternet.com

Please see the Ivory Page for full details, including how to register.

Felicks Yaniewicz was a distinguished composer and musician.  He was a friend of the great Muzio Clementi, and a number of Clementi pianos appeared with his name on the front.  The best known of these was recently restored by Douglas Hollick, and is now exhibited at the Polish House in Edinburgh.  A programme of events to celebrate his life and work has been organised for the summer; details are on the       Yaniewicz Page, and a flyer for the events is below:

Ivory Sales in the European Union

The European Commission in Brussels has now published the directive restricting ivory sales in the European Union.  It is my understanding that each member state is required to enact appropriate national legislation.  Although states have some flexibility to alter the detail (e.g. penalties and registration procedures) it is also my understanding that the principles must be carried forward into law.

"A type of legislation issued by the European Union which is binding on Member States in terms of the results to be achieved but which leaves to Member States the choice of methods."

The two documents below form a summary of the directive. 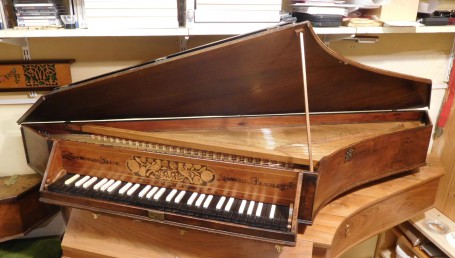 The famous Keene and Brackley spinet is rightly the model for many reproductions, both amateur and professional.  I am happy to announce that by courtesy of the copyright owner of John Barnes' original plan, we are now able to offer copies at an affordable price; they are now available through Friends of Square Pianos for just £20, plus carriage at cost.

Even if you are not going to build an instrument yourself, anyone with an interest in spinets will find this plan fascinating.

Please see the new page Plans For Sale for details of plans of spinets, harpsichords, and clavichords offered at reasonable prices.

Early keyboard Instruments, whether originals or replicas, do require more frequent tuning than modern iron-framed pianos.   The costs of professional tunings mount up, and it can also be a problem finding a tuner who is happy to work with our ancient instruments.  For this and other reasons, most of us do our own tuning.  To offer some help to those thinking of having a go, I have prepared a short PDF guide, available on request.

It is very important to have a properly-fitting tuning hammer, which should bear on a good portion of the two flat faces of the wrestpin (tuning-pin).  If the fit is too sloppy, the corners of the pin and the socket of the tuning hammer will be damaged, and the backlash makes accurate tuning difficult anyway.  If it is too small, it will grip the top of the pin only, with the same result.

Tuning-hammers are available from Lucy Coad or David Law - see 'Suppliers' page of this website.  Alternatively, I am now able to offer a limited number of hand-made hammers tailored to your own pins, either directly or via a template.  Please see the Tuning and Tuning Hammers page for details

I have made a number of very short and lopsided hammers; these have proved popular with owners of Broadwoods and other pianos with the pins at the back, and also with spinet owners.  In both cases the lid makes tuning difficult (unless it can be thrown right back) and these special hammers can help.  They don’t look as elegant as the long-stemmed symmetrical type, but they are quite practical! 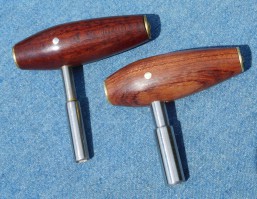 The Spinets of the Hitchcock Dynasy - Names, Numbers, and Dates 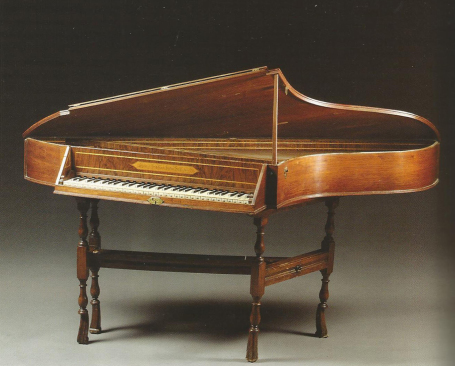 The second of these two essays builds on the first ('1664 and All That' - see below) and offers a new interpretation of the data concerning the establishment of Thomas Hitchcock as the leading spinet maker.  It explains the somewhat confusing numbering sequences, their relationship to dates of manufacture, and the change on the nameboard from Thomas to John.  As before, the piece is rather long to transfer directly to this page, so please open the PDF below.

Some confusion still surrounds the early life and career of Thomas Hitchcock.  When was he active?  Who was ‘Thomas Hitchcock the Elder’?  One of the first histories of keyboard instruments in Britain was written by Edward Rimbault (pub. 1860).  He tells us that “John [!] Hitchcock made these little instruments of a compass of five octaves. Several specimens still exist bearing dates between 1620 and 1640”  It is likely that Rimbault mistook front numbers for dates, and numbers as high as this would indeed have carried the name of John Hitchcock, but it seems surprising that he had apparently never seen Hitchcock spinets carrying numbers which could not possibly have been dates, such as 1460.

Perhaps the most important early historian for keyboard instruments was Alfred Hipkins of Broadwoods.  He compiled the catalogue for the 1885 International Inventions Exhibition, and used this experience for his 1888 book ‘Musical Instruments – Historic, Rare, and Unique’.  It is in this book that Hipkins makes the notorious statement “…Thomas Hitchcock, whose autograph appears in spinets from 1664 and 1703.”

His famous 1896 book ‘A Description and History of the Pianoforte’ repeats this as “Thomas Hitchcock’s written dates found within instruments made by him cover the long period between 1664 and 1703.”  But he then goes on to note that Hitchcock was the first to number his instruments, so he did realise that the numbers on the nameboards were not dates.

As so often happens, later authors followed these statements as unchallenged facts, and the misunderstanding is repeated in James (1933) and Russell (1959).  Boalch ‘Makers of the Harpsichord and Clavichord’ (2nd edition 1974 and presumably 1st edition 1956) has a variation of the muddle, ascribing ‘1664’ to ‘Thomas the Elder’, and ‘1703’ to ‘Thomas the Younger’.  Even the 3rd edition (1995) still has the entries, but the editor (Charles Mould) does realise that something is not quite right, and offers the plaintive statement: “…1664 does seem early for a wing spinet in London, and the date may have been misread.  If it were possible to locate this, and the other early Hitchcock instruments, it would be possible to be more precise about the identity and dates of the members of the Hitchcock family in the early years of their workshops.”

So it was that, having kept a low profile since 1885, the mysterious ‘1664 Hitchcock’ emerged from the shadows.  This is the story of an important little spinet – it is my privilege to be part of the story. 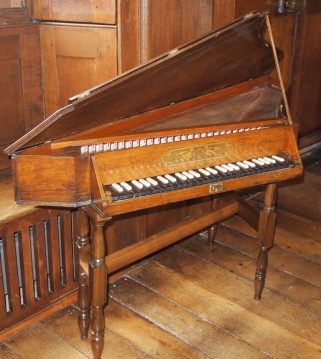 The essay is a bit long to transfer to this page directly, so please open the PDF below.  All comments welcome!

Some of you may have followed the construction - starting from a pile of wood - of this replica of a remarkable and important instrument.  The spinet is now complete and playing well, and has gone to its new home in the Marlow Sigal  Music Museum in South Carolina.   Please see the Spinet Page for the story. 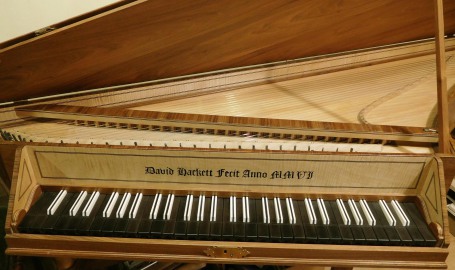 We all love those beautiful English Spinets, and now they have a Page of their own, where I hope to encourage interest, ownership, and amateur makers.

Go to The Spinet Page

About the 'Webmaster' (David Hackett)﻿ 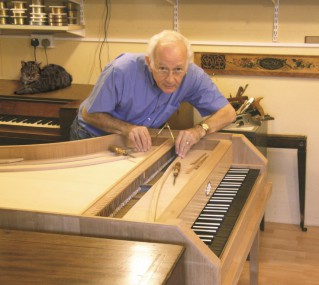 My only claim to respectability is that Carl Dolmetsch once offered to take me on as an apprentice.  This was in 1962, when I had just shown him my first clavichord, and been his guest at Haslemere.  However, he also advised me that it would be better to go to University, and I accepted his advice.  Early Keyboard Instruments have therefore remained a hobby, and now happily retired, I am able to spend a bit more time enjoying them - and encouraging others, I hope..﻿ 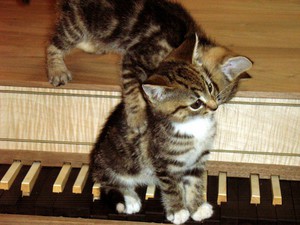