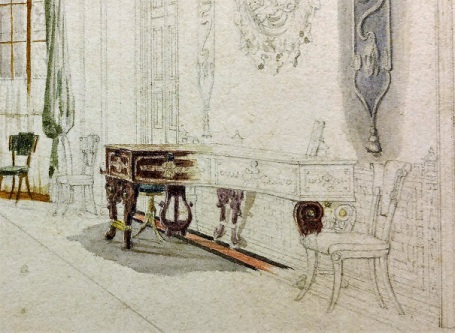 Do you have a piano made by Thomas Tomkison (c1764-1853)? Or do you know of a surviving Tomkison piano? If so, we need your help in a project which is largely underway to document all the surviving instruments by this largely forgotten maker. 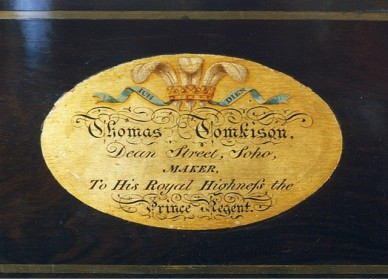 The standard reference books will tell you that he held a Royal Warrant and operated from Dean Street Soho between 1799 and 1851, but little more. Even in his lifetime people had difficulty spelling his name; his apprentice record is in the name of Tompkinson and his death certificate has him down as Tomkinson. What we have unearthed about the first half of Tomkison’s career is described in an article that appeared in the Galpin Society Journal for 2014 (‘No maker to be Compared’ - the early pianos of Thomas Tomkison’);  you can access this article via the JSTOR site, either by logging in under your University Alumnus Scheme, or registering with JSTOR to read individual articles.  It contains an appendix listing by serial number all the pianos then known to us.

In essence, in 1778 at the age of 14 Tomkison, the son of a jeweller and silversmith in Covent Garden, was apprenticed in the Worshipful Company of Cooks; not as odd as it may appear, because there was no dedicated guild for musical instrument makers.  In late 1798/early 1799 he established himself in Dean Street (at number 55, later renumbered 77) as successor to the bankrupt piano-making business of James Henry Houston.  He thereby inherited the robust tradition of a workshop at 95 Wardour Street, where George Garcka, Bates & Co and Houston had operated in succession during the hectic decade of the 1790s. 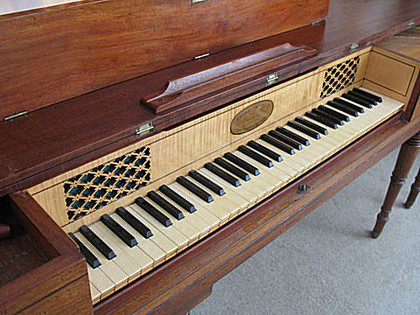 Within a few years, Tomkison had made himself a rival respected by Broadwood and Clementi for the fine musical qualities of his pianos as well as his high standards of cabinetmaking.  He made the first of a succession of instruments for the Prince of Wales (later Prince Regent and then King George IV) in 1807.  He supplied grand pianos to Spanish and Prussian royal courts, a square piano to Admiral Nelson and Lady Hamilton, knew all the leading makers and pianists in London, was on friendly terms with the Erard and Pleyel dynasties in Paris, and enjoyed a reputation as a connoisseur of pictures as well as music.  While Tomkison’s name is now less well known than those of other leading English makers, headlines were made when his most iconic creation, the grand piano he made in 1821 for George IV, was purchased by the Royal Pavilion in Brighton and returned to its original home. 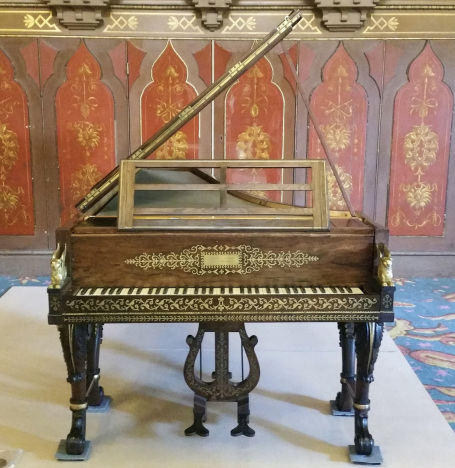 Grand piano number 1329 returns to the Brighton Pavilion in 2017, courtesy of Royal Pavilion and  Museums Trust (photo by Alexandra Loske).

1800-1850 was a period of huge change in piano-making. Over and above keeping pace with evolving building technology, Tomkison was a pioneer of structural as well as decorative innovation, e.g. experimenting with half size ‘dustboards’, supporting his square pianos on four, not six legs (and his grand pianos on three, not four legs), introducing the ‘French front’ for grand pianos (where the case sides at the keyboard end are cut back to allow the performer’s hands to be seen from the side), producing a 6.5 octave square as early as c1824, incorporating string plates as bold decorative features, and adopting  cross-stringing in a small upright piano model in the 1830s.  The reputation of his pianos for structural stability helped him to export widely to India, the Americas and significantly, from the mid 1820s, to Australia. 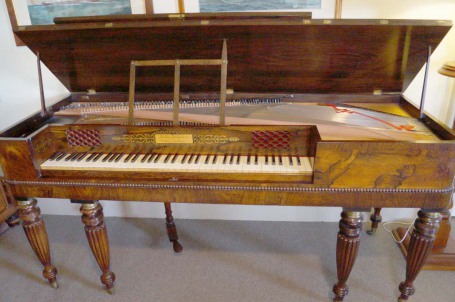 ﻿WHAT WE CAN OFFER.  The evolution of Tomkison’s patterns of casework and technology can be readily charted thanks to his serial numbers, which run in separate series for squares, grands, cabinet uprights and cottage pianos.  The numbers are crucial when it comes to dating Tomkison pianos, none of which show dates unless hand-written on the side of the top or bottom key (common practice only after c1820). The serial number can be found stamped alongside the name T. TOMKISON - on grands located on the wrestplank, on squares on the flat surface to the left of the keyboard, and on uprights at top right above the tuning pins. 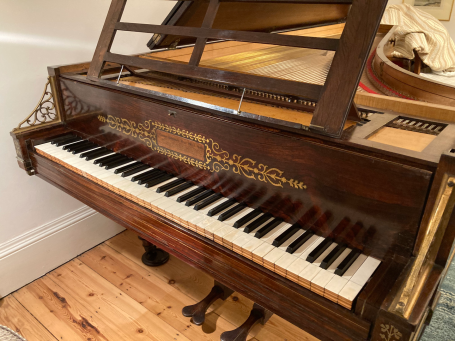 Our register contains serial numbers for squares ranging from 11 to 11,225: for grands from 22 to 2,405, and for cabinets from 214 to 1,390 (suggesting that in all the firm will have manufactured more than 15,000 instruments).  We know the serial numbers of more than 220 Tomkison piano surviving worldwide (and a further 60 for which no number is recorded).  This enables us to provide dating information and points of comparison for anyone interested in Tomkison and the development of the English piano between 1800 and 1850.  The register is hugely indebted to the work of the co-founder of the project, Tim Harding, whom we sadly lost to cancer in April 2019.  Luke Bradley has now kindly agreed to step into this role. 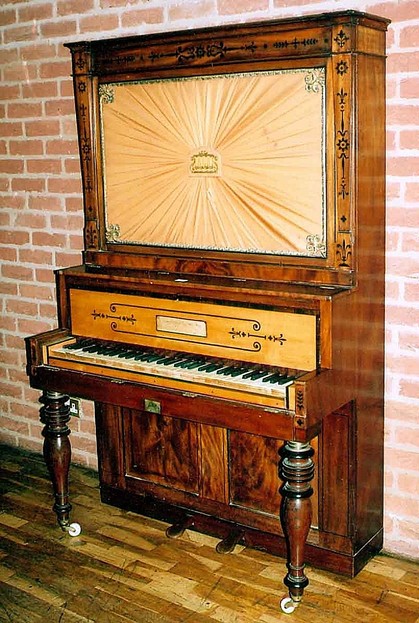 Please send any information you can contribute to tomkisonregister@gmail.com   We would be grateful for the serial number of your piano, details of  its type, action, compass, case, legs and any additional numbers or visible inscriptions. We maintain a photo library for your pictures.  Our register feeds in to the expanding Clinkscale online database of all surviving early pianos, and of course in doing so we respect the privacy wishes of owners. Under the auspices and following the spirit of FSP, we welcome input from Friends and hope to provide a useful facility to all. Thank you for any assistance you can give.