2 - The Square Piano in America by Tom Strange

This short history fits neatly into just a hundred years.  There were pianos before then (in Italy, for example) and the square piano survived longer in mainland Europe and particularly America, but the last Square piano made in England was delivered by Broadwoods in 1866.
In many European countries, the Guild system placed restrictions on the freedom of craftsmen and tradesmen to practice freely: the system maintained standards, it is true, but it did little to encourage, or even allow, enterprise and innovation.  However, in mid eighteenth-century London, the grip of the guilds was weakening, and anyone could develop a successful business through his own ability and hard work.
Thus is was that Johannes Zumpe arrived from Fürth, near Nuremberg in about 1750.  He worked for the harpsichord maker Shudi for a while, but soon set up his own workshop in Hanover Square.  To all intents and purposes he ‘invented’ the square piano as we know it, although it is of course developed from earlier instruments, and the clavichord in particular.  Amongst the many things he got right was to give his first pianos a massively stronger base structure, to resist the pull of the much thicker strings.  As we will see from other pages on this website, later makers failed to realise the importance of this, when strings got even thicker.
Zumpe's genius was to combine various elements into a small, practical, reliable, and relatively inexpensive instrument.  His first surviving piano is dated 1766, and it seems likely that this was the year in which he introduced the English Square Piano to London.
These first pianos were barely four feet long, and eighteen inches wide – considerably smaller than even a contemporary spinet.    The 1769 Zumpe below is being guarded by a lovely 1787 Broadwood grand.﻿ 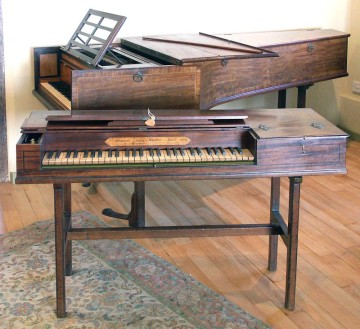 One important adoption made by Zumpe was his use of covered or overspun strings for the bass notes.  By adding weight without reducing flexibility, this technique enabled a relatively short string to give a reasonable sound.  It was used for about the lowest eleven notes.  There is some evidence of the use of covered strings in clavichords, but they were certainly never used in original  harpsichords or spinets.﻿ 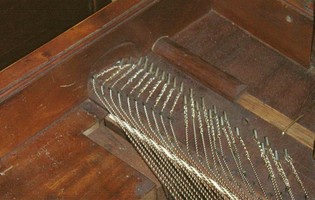 Success was rapid, aided in no small part by the encouragement of Johann Christian Bach, the youngest son of the great Johann Sebastian Bach.  The ‘London Bach', as he is sometimes called, arrived  in 1762, and quickly established his reputation.  He became Music Master to Queen Charlotte, and gave what were probably the first public performances on the piano in the late 1760s.
Quite soon, Zumpe’s workshop was unable to meet the demand, and he was joined by other makers, working in the same part of London.  All of these makers either came from Germany (e.g. Pohlman, Ganer) or were apparently of German extraction (e.g. Beyer).
The earliest piano to have passed through my hands (so far) carries the name “Longman Lukey & Co”, but it was almost certainly made by Frederick Beck (another German immigrant) in about 1772. ﻿ 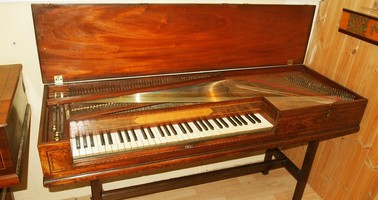 This delightful piano is slightly longer than an early Zumpe (at 4’ 9”) but is still compact, and is identical in almost every detail.  There is no pedal: it has three handstops (the brass knobs in the left corner) to control the bass and treble dampers, and a Buff or Harp stop which mutes the tone with a strip of soft leather.
Note that these earliest pianos are always on simple trestle stands.
Moving on about fifteen years, the picture below shows a Ganer piano from 1781.  Christopher Ganer's pianos were always very handsome, and are still sought-after today.﻿ 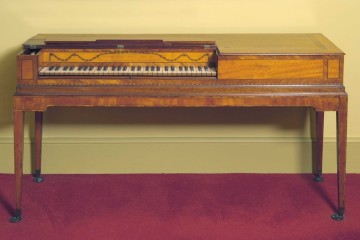 This piano sits on the ‘French’ stand which was fashionable until about 1806, but is otherwise little changed: it still has the five octave keyboard and handstops.  Note also that the lowest FF# is missing.  This is an intermittent characteristic of early pianos, and there seems to be no firm pattern, even within the instruments from the same maker.
The name of John Broadwood is significant in piano history. Born in 1732 in Oldhamstocks, near Cockburnspath, Scotland, he trained as a joiner, and travelled to London to work for Shudi, the famous harpsichord maker.  He became a partner, married Shudi’s daughter Barbara, and inherited the business in 1773.  He experimented with pianos, and produced his first (a square) in 1780.  His pianos still had the simple English action as invented by Zumpe, but he patented a number of innovations, including an elegant and efficient brass under-damper system, and moving the tuning pins to the back of the case. The piano below was made in 1787, and is almost exactly the same as those made in 1784, Broadwood’s first year of serious production.﻿

Pianos of this basic design continued to be produced until about 1806.  They very rarely had a pedals, and never handstops.
Two important innovations were made in the late 18th century.  In 1786 John Geib patented an action with an escapement, which allowed the hammer to drop back after striking the string.  This minimised the chance of a hammer bouncing and spoiling the sound, and at the same time gave better control at the pp end of the dynamic range.  This paved the way for heavier hammers, thicker strings, and greater volume.  Then in 1794, William Southwell (a distinguished maker from Dublin) patented two important developments: the so-called ‘Irish’ damper, and the extra-note system to allow the extension of the compass to 5½ and then eventually 6 octaves.  Both of these patents were bought-out by Longman & Broderip, and gave their pianos significant advantages over the competition (although they also continued to make simpler models for a few years).

The desire for the keyboard to go beyond five octaves was a natural one, although it is always difficult to say which came first – the instrument or the music.  A few 5½ octave pianos were made without the ‘extra note’ system, by having all the notes in one run, such as this lovely example by Houston.﻿ 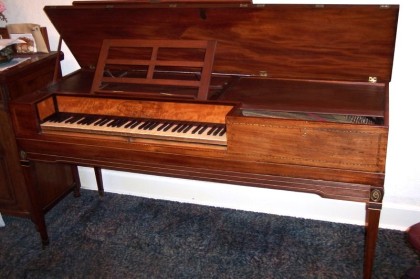 The first Broadwood 5½ octave squares, made in 1793, also used this arrangement, but it does cause crowding of the notes and strings in the treble, which limits the available tone available from the necessarily tiny hammers. The ‘extra note’ system (also called ‘additional keys’) caused the top dozen or so hammers to attack through a slot in the soundboard, with the action underneath, seen here in this Clementi piano under restoration – just the ‘extra notes’ action has been replaced, together with the corresponding strings.﻿ 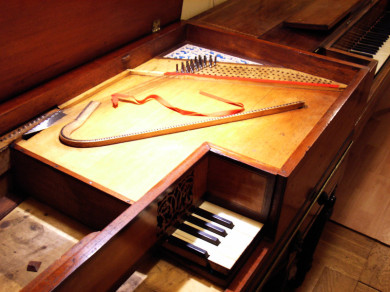 The pianos carrying the names ‘Longman & Broderip’ (later Clementi & Co) are still held in high regard, with their light and responsive action, and sweet tone.  They are also frequently graced with beautiful flower paintings.﻿

If only we knew the identity of the artist!
Between 1785 and about 1810, many pianos were made with various combinations of the ‘old’ (single action, lever-dampers with whalebone springs) and the ‘new’ (escapement or ‘double’ action and Irish dampers).  Patent restrictions were part of this story, but there were many agreements, infringements, and lawsuits!  By 1807, Broadwood pianos adopted both innovations, but it is notable that Broadwoods never had nameboard paintings.  About this time, six turned legs became usual, replacing the French stand, as on this Clementi. ﻿ 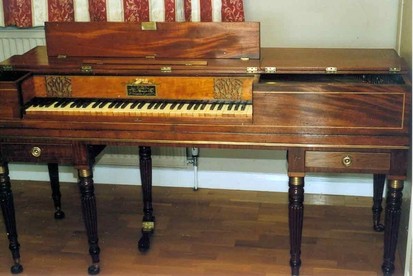 Gilt-brass collars, casters, paterae, and other embellishments were also available as we enter the Regency period.  These are perhaps the most showy of all square pianos.  The compass was also extended to six octaves somewhere around 1815, although it was not usual until ten years later.  The fine piano below, made by Tomkison in the 1820s, is remarkable in having a compass of 6½ octaves.  Note also the use of Rosewood, not only for the nameboard but for  the whole case of this very special instrument.  Rosewood was, however, usual for nameboards after the early 1820s: compare this with the lighter treatment of the earlier pianos, with their sycamore or satinwood nameboards.  ﻿ 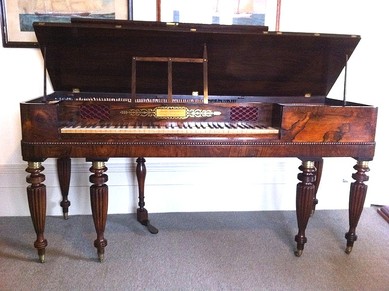 We often consider this rather sombre, dark-toned fashion to be ‘Victorian’, but it is worth noting that fashion was moving in this direction at least fifteen years before Victoria’s accession.
Moving on a few years, the Broadwood below is typical of what for many of us was our first square piano.  It dates from about 1830, when Broadwood’s dominance of the market was at its height.  This one has an iron string-plate and strengthening bar, and the usual six-octave keyboard.  Such pianos turn up quite often in good condition and at very reasonable prices, because there were a lot of them in the first place, and they are more robust and reliable than earlier types.﻿ 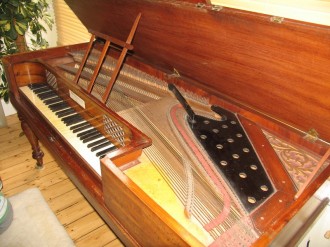 The final example in this short history is another Broadwood (below) made in 1854, and a fine example of the very last English Square Pianos.﻿ 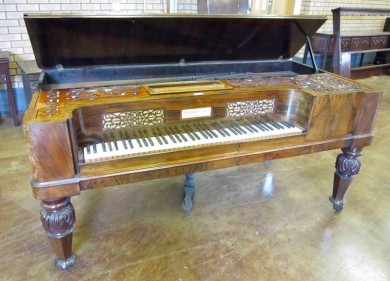 This one is again in rosewood, and has a compass of nearly seven octaves – almost the same as a modern piano.  These handsome instruments have a splendid tone, but they are  large and heavy.  The very first ‘cottage’ upright pianos had appeared around 1800, but they took some years to establish themselves.  However, by about 1850, they had become the  usual domestic instrument.  This Broadwood square was made in 1854, and took up considerably more floor-space than an upright: it was also more expensive.  The square was now caught between the upright and the grand, and gradually declined in popularity.  Very few were made after 1860, and the very last English square was delivered by Broadwoods in 1866.﻿

Well, we thought that these Broadwoods were the last Square Pianos to be made in England, but recently this remarkable Collard & Collard emerged: 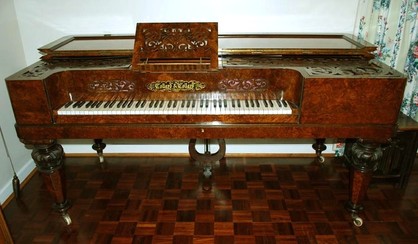 This one really does have the full seven octaves.  It is overstrung, with a full iron frame.  Sadly, C&C's records were lost in a series of disastrous fires, but this one is numbered 97188.  I used to own (upright) number 102997, which was dated 1875 on the lowest key - so we estimate that this one was made about 1872.

PPS: We live and learn.  We thought that the above Collard and Collard really did represent the end of the story - until a remarkable piano turned up at Bishop & Miller's auction on 3rd December 2016. 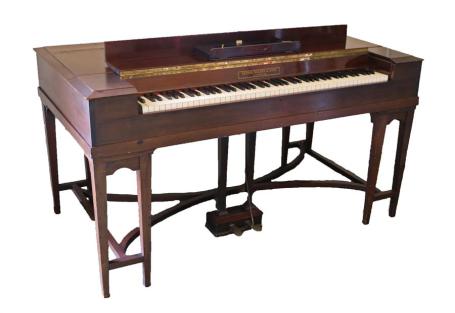 This piano was made by George Roberts of London, apparently in the early 20th century.  We see that it has a full compass of 7¼ octaves; what we do not see is the iron frame and ingenious downstriking action.  The Estimate was a modest £200, but even so the piano was not sold.  It is sad that we cannot find a place for such an historic instrument, neither in a museum nor in a private collection.