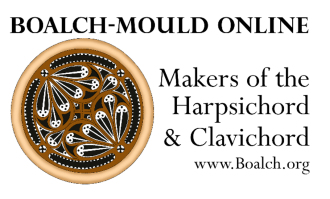 One of the foundational publications in early keyboard studies is about to be published as a free online research database.

Boalch-Mould Online (BMO) is a research database named in honour of Donald H. Boalch and Charles M. Mould whose groundbreaking work Makers of the Harpsichord and Clavichord 1440–1840 was first published in a print edition of 1956 and updated by Oxford University Press in 1974 and 1995.

The new online edition continues to refine, update, and carry forth their findings into the digital age. With biographies of known makers and an extensive and growing catalogue of surviving instruments, BMO is a searchable database available on the Internet at no charge to all researchers, owners, collectors, caretakers, and enthusiasts of historical harpsichords and clavichords. The eventual online publication of his database was envisioned by Charles Mould whose preface to the 1995 edition predicted, “that in due course it will be available free of charge to all scholars via the internet.” Dr. Mould has given his strong endorsement to the present .

Photographs of instruments will be a major new addition for Boalch-Mould Online. A new pre-1925 date limit increases the timeframe covered by the print editions to include the beginnings of the early keyboard revival. Also added for the first time will be important harpsichords and clavichords by unknown makers.

An interactive user interface is currently being developed, and the database is being updated and expanded. Lance Whitehead is updating the biographies from recent research and publications.

BMO General Editor is John R. Watson in Williamsburg, VA (Editor@Boalch.org) and Biographies Editor is Lance Whitehead based in Edinburgh (Biographies@Boalch.org). A board of contributing editors for the catalogue of surviving instruments is being formed.

Donald Boalch’s Makers of the Harpsichord and Clavichord 1440 – 1840 has been a valued resource for us all for many years – the first book we turn to when we encounter an original instrument. The third and most recent edition (edited by Charles Mould) is now very difficult to obtain – the cheapest on-line offer is currently over £1,400.  Moreover, since its publication in 1995, the development of the internet in particular has brought to light a wealth of new information, and the ownership of many instruments has changed.  So we are delighted to announce that with Charles’ blessing, the launch of ‘Boalch Online’ is now assured.  It is expected to be available by the end of the year, as a free-to-access database.  One change will be that the scope will be increased by eighty years to 1920, to include the early pioneering work of Arnold Dolmetsch and others.

It will run alongside Clinkscale Online, the database for early pianos, and will follow a similar format.  Photographs will be included where possible.  The work of transcribing the data from Boalch III is now complete, and development of the database itself is well advanced.  The work is being undertaken by Tom Watson (formerly of Colonial Williamsburg Foundation), Tom Strange (Sigal Music Museum, South Carolina) and Tom and Michelle Winter (Clinkscale).  I am happy to be a small part of the team – I was the grit in the oyster!

A lot has changed since 1995;  Amendments and new information will be invited in due course.  In the meantime, I will be happy to be a point of contact, and to receive any preliminary offerings.