Please remember that, as with 'Pianos for Sale', I have not usually seen these instruments, and any comments I make may be based entirely on information supplied by the auctioneers, or what we can see from the pictures.

Thomas Haxby of York was one of the finest English makers of organs, harpsichords, spinets, and pianos; his work was fully equal to any of the London makers.  This lovely piano, dated 1793 was one of his last - he died in 1796.  It is now being offered for sale at Tennant's Auctions, Leyburn, Yorkshire, on 16th July.

It has two pedals; no handstops.  These presumably to operate damper-lift and buff.

Beautiful nameboard and keyboard.  It has of course been registered for legal sale under the Ivory Act 2018,

Apart from the strings, everything does appear to be original.

It is fair t0 say that restoration will be necessary; the bridge looks good, but the soundboard does need attention.

There is some minor damage to the edge cross-banding, but as far as I can see from the pictures, the beautiful complex inlay-banding looks intact.  Well-restored, this will be a lovely little piano.

Against the estimate of  £800 - £1,000, and presumably protected by a reserve, this one failed to sell.  Perhaps it will return?

Images by courtesy of Tennant's Auctioneers

There is another example of the work of the Broadwood/Burne-Jones/Morris team in the Victoria & Albert Museum, where it is now appropriately with the Pre-Raphaelite paintings.

Perhaps more in our league, lot 15 was a fine 1765 spinet by Baker Harris.  There is a 1765 Baker Harris spinet listed in Boalch, but that one went to John Collins of Newport , Rhode Island, in the year it was made, and is almost certainly still in the USA.  So this one is a 'New Discovery'.

As with all affected instruments in PianoAuctions sales, this one has been registered for exemption under the UK Ivory Sales Act 2018.  However, the ivories are somewhat scruffy, and I suggest that if export is a consideration, their removal would be no great loss, and replacement with a nice set of casein or Elforyn keytops would be an improvement.  Actually, I think that would be a good idea anyway, whether export is a consideration or not.

I am currently 'de-ivorizing' my Big Harpsichord, and would be happy to chat about this.

It looks as if the jackrail padding has flopped, but this is trivial.

The case is somewhat plainer than many later eighteenth-century English spinets, but this is primarily a musical instrument, with a supremely elegant shape.

An Intereseting L&B at Trevanion

This pretty Longman & Broderip piano was  in the sale at Trevanion Auctioneers, Whitchurch, Shropshire, on 29th June.  The number 446 (in the five-octave series) dates it to 1785.

The rectangular name-panel is unusual for an L&B, and the botanical garlands are of a pattern often used by Ganer, who made pianos for them.

The shade, covered in the original green silk, is still present.  It does need some attention - we note a few loose dampers - but this could be a lovely little piano.

Pictures by, and by courtesy of, Trevanion.

There was be one square piano at Gardiner Houlgate's June auction - a repeat appearance of the 1792 James Ball seen at the March sale; this time it sold for just beow estimate at £550. Details of this technically interesting piano are in the report of the March sale further down this page.

But bearing in mind that we love a wider group of early keyboard instruments, there were be three items of special interest. 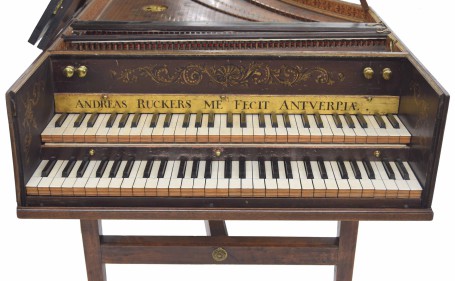 The star was surely this rather fine two-manual harpsichord by Andreas Ruckers.  Formerly in Dartington Hall, it was sold at Sotheby's in Novemeber 2004 for £104,160.  It is an example of an English 'ravalement', with crossbanded mahogany veneer to the outside of the case to match contemporary furniture, but the inside largely untouched.  AA - e3 compass with ivory keys, 2 x 8' + 4', lute, and a pedal to operate a machine stop. 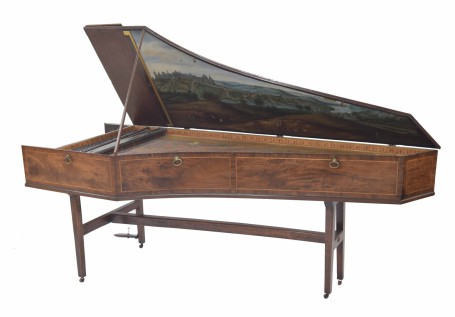 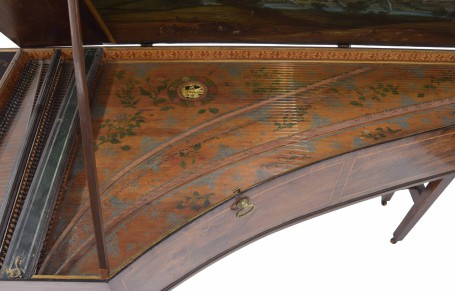 The soundboard looks original, with an 'AR' rose.  We note that the painting is intact, showing no signs of a soundboard extension, and the somewhat unusual compass was accommodated within a case the same width as a standard Ruckers two-manual transposing harpsichord and therefore presumably unaltered.  We note that there are no cheek-blocks at the ends of the keyboards.

The seventeenth-century painting inside the lid is of a landscape outside St Theresa's hometown of Avila, and is attributed to van der Meulen (1632 - 90). 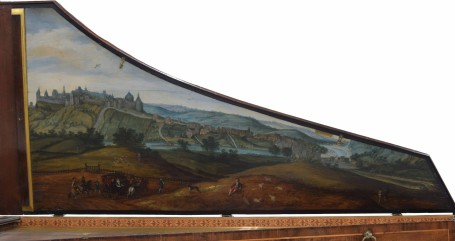 The estimate for this historic harpsichord was £70 - £90,000.  But the bidding was brisk, and every offer from the floor or internet was immediately countered by the auctioneer from a card-bid.  The hammer fell at a remarkable £180,000 - £227,520 with premium.  Somebody really wanted this lovely harpsichord!

This rather fine five-octave clavichord is by Marcus Gabriel Sondermann of Rendsburg, in the state of Schleswig-Holstein.   It was made in 1805.

One other instrument by Sondermann is recorded, a 1796 clavichord now in the  Musikhistorisk Museum in Copenhagen, to whom it was donated in 1898, and restored by Hornung & Moeller in 1908.

The instruments with ivory keys in this auction have been registered as required by the UK Ivory Sales Act.  But this one, like many German instruments, has bone keys.  The picture below is a good example of the characteristic appeareace, with prominent pores.

An then we had a very interesting spinet, inscribed   Joseph Mann Sven Fecit 1768.  This instrument was formerly sold at Sotheby's in November 2001, but I have no record of the maker.  The stand is modern, and the auctioneer observes that the soundboard is either a replacement, or has been enthusiastically cleaned.

The style with a mahogany veneered  case is typical for a late English spinet.  But  we see that in fact the compass goes up only to e3 - more usual for a spinet made fifty years earlier.

Somehow I'm a bit puzzled by the keys, with unusual arcading for an English instrument, and a mixture of one-piece and two-piece ivory (?) covers.  All comments welcome!

All images by, and by courtesy of, Gardiner Houlgate